Black Friday: what do our members think of it? | Viewsbank
Skip to main content

Black Friday: what do our members think of it?

It’s that time of year again – our inboxes are filling up with emails seemingly offering us huge discounts on everything from electronics to fashion and more. In fact, while Black Friday this year is technically on this coming Friday 23rd December, it seems like this year’s event could be the biggest one yet in the UK, with Black Friday actually feeling more like “Black Friday Week”, with shoppers being given even more chances to “grab a bargain”. Interestingly, it would seem that Black Friday may be at least partly responsible for driving a trend that’s seeing November become more and more popular for Christmas shopping in the UK. According to the BBC, November sales grew at a faster rate than December sales in 2017 for the first time.

Unless you’ve been living under a rock for the last few years, it’s unlikely that you haven’t heard of Black Friday by this point in time. In an admin poll we ran earlier this month, just 2.2% of you claimed to have never heard of it, but just in case those members are reading this, Black Friday is a tradition that originated in the US, as a heavily discounted shopping day to kick off Christmas shopping. Black Friday is always on the Friday after the American holiday of Thanksgiving, and is also followed by Cyber Monday with substantial online discounts. However, it’s not quite so clear cut these days, with many retailers merging both events into one, and even running sales events over a week or more to ease the pressure on shoppers, staff and delivery services.

If you’re interested in grabbing a bargain, it certainly sounds like a tempting time to shop. However, along with the discounts, there’s also quite a bit of negativity surrounding Black Friday in the UK too, with many labelling it as “just another tacky US import”. Furthermore, it would seem that the media aren’t doing a huge amount to improve its image, with tabloids loving nothing more than a chance to share some shaky mobile phone footage of a brawl in Asda over £99 HD TVs. I’m sure we can all agree that such behaviour is far from ideal, but thankfully it doesn’t offer a fair representation of the majority of shoppers this November.

So what do our members think?

On the flipside we found that just over 41% of you were not looking forward to it with 30% simply saying that they were not interested and 11.2% feeling more strongly that they “can’t stand it”. We also found that 8.8% of you were sitting on the fence with “not sure” while the remaining 2.2% were unaware of what Black Friday is. See below for our full results accurate at the time of writing.

The comments also proved interesting with member “loueeze” saying “I always look out for any bargains online for the grandchildren there are usually a few good deals in the run up to black Friday, but I'm certainly not interested in queuing and fighting over things and making a fool of myself!”. Another of our members “adrian50283” added “It's a bit of a rip-off really. You can get better deals throughout the rest of the year.” 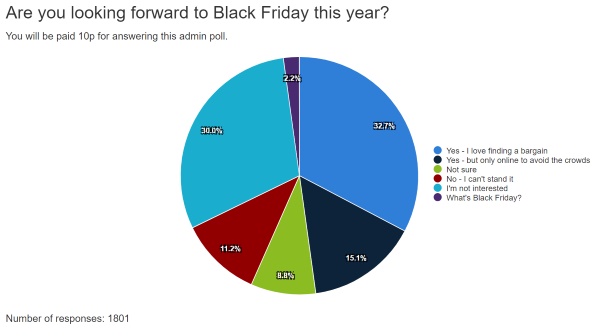 What do you think about Black Friday? Let us know in the comments!

Bargains are only bargains if you need them. I'm sure there are some good deals, but it is difficult to see the wood for the trees. I think is just another American marketing ploy, which we could do without. . Also I feel sorry for the shop staff who often have to put up with bad behaviour from the public.

Oh! I so agree with you!

Not interested in Black Friday unless I want a specific item and then I would do plenty of research about it to get the best deal.

Yes it is an American import, and we can do without.  No, I have not seen the bad behaviour from the public, as I've never shopped irl on Black Friday, and because most of the "deals" we get are not that great.  But the first comment here gets it more or less right - a deal can be a deal if you have that need, but it isn't if you don't.  The people whinging about BF are those who have a budget for a £400 TV, see an £800 TV reduced to £600 and think 'sod it, that must be wonderful' and buy without doing any research, diligence or simple thought.  People will spend an hour on price comparison sites to save £50 on a bill, but not check camelx3 or similar when they're spending just as much?  Like any consumerist discount, it's of benefit to us who can actually think about such things, and an easy snag for numpties who won't.

Typed on a laptop bought on last year's Cyber Monday.  Has it gone down in price further since?  CBA.  Was it worth every penny we paid to fulfil a need?  Definitely.  People should be trained to not see the seller's price on an item, but to see the value of an item to the buyer.

american marketing mass hype   is getting longer every time

I acknowledge Black Friday as the start of Christmas. Time for the Xmas tree to be put up again. I love looking forward to when poeople start to talk about Cyber Monday, Wonky Weekend and Black Friday.

Hate it, why do we have to copy every bad American idea?

Much  hyped bargains encourage the unwary to buy things they don't need and get themselves into debt.

Entirely agree with 'theediscerning' and note that there has recently been a suggestion that money management be added to the school curriculum, though whether it will help or not I don't know.

This is a great way to get rid of out of date stock that was offered at a lower price earlier in the year!

in the usa they have true real sales at this time where as we over here are a great conning nation and there is no longer such thing as a sale in most shops..currys being the biggest con artists by changing prices up and down up to 6 times a year on several items ,or when they have end of line old stock on sale they have none around until full price comes back ( funny how that happens) as does argos every year for last 15 years that i know of as i follow prices and check them....

We're better behaved than the yanks but BF works for me.

1 year ago by valerie moorby

America marketing ploy generating mass hysteria.  I don'tsubscribe.    I'ts only a bargain if you need it.

Agree completely I dont shop on these days. Its only a bargain if you need it.

Probably the item will be cheaper in the Christmas Sales.

its just a big con

1 year ago by oysterman9

Another unwelcome import from the States along with Halloween. It will be Thanksgiving next

Why would I want to celebrate giving thanks for slaughtering all the indigenous population?

1 year ago by Carol Faisali

It’s just another way to deceive the customers they are receiving a Bargain, when in fact they are being Conned . Stay clear of these sales.

I don’t need anything. I only buy what I need.

1 year ago by Jenx

Found no bargains online or in store, a lot of hype but not much matter.

All a hype. I would never rush to buy on principal anyway!

1 year ago by Elanor Laughlan Raeside

Plot to spend more money on stuff we don't need

10 months ago by Wayne Massey

3 months ago by Jill Hodosi

It's ok I suppose if you have any money

3 months ago by Sumaya Mohamed